it was Opening day for the much anticipated Train exhibit in Frisco called “Traintopia”. Boy did it not disappoint! 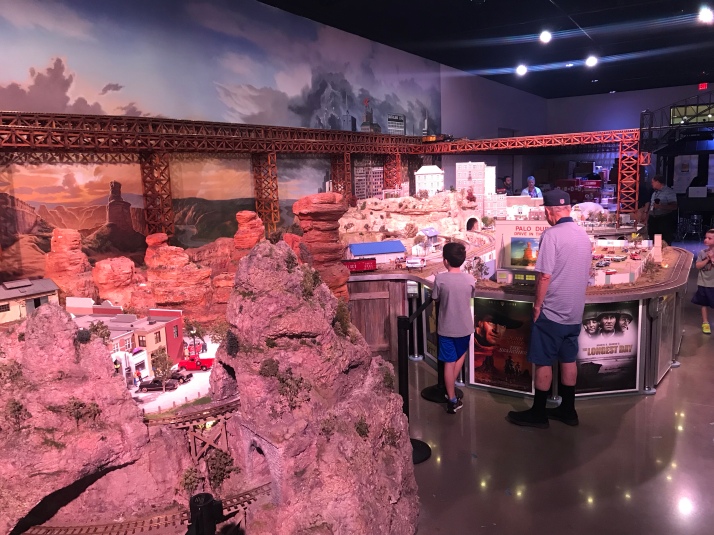 “Traintopia is not a passing through exhibit, it is permanent and are we are very excited about that,” exclaimed Bob LaPrelle, President and CEO of Frisco’s Museum of the American Railroad. 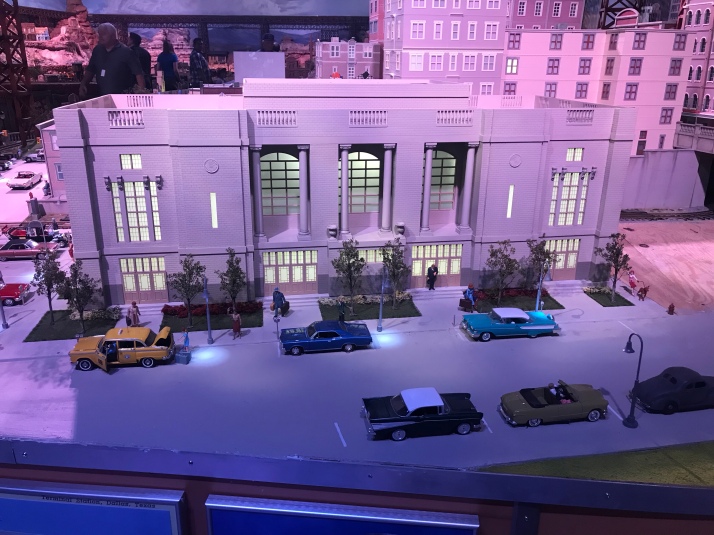 Wednesday – Saturday 10AM to 5PM 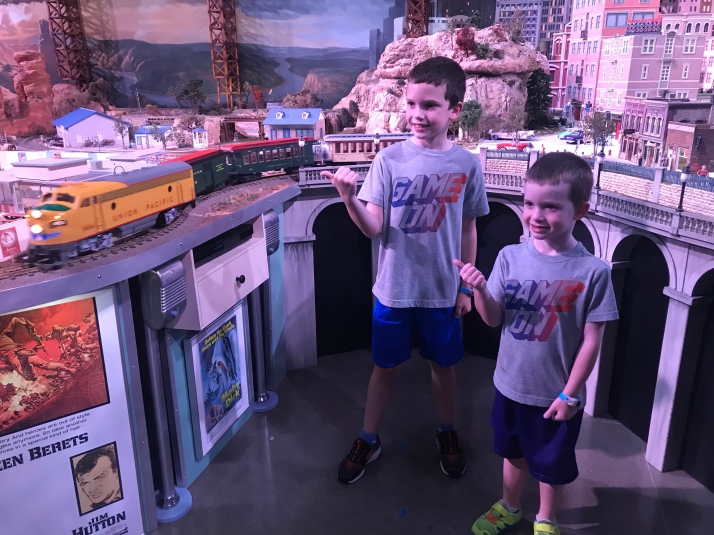 I took my boys and my train lover dad to the grand opening and honestly wasn’t expecting that much but it was awesome.

I grew up with trains. Creating different tracks and sometimes even running over conductors and cows since I was so young. (My dad has a lot of patience.)

I found out this all began when Steve Sanders took a train from Union Station in Dallas to Colorado for his sleep-over camp, which started his love for trains.

When Steve became an adult he owned a hobby shop and began collecting the trains and owned over 200 locomotive cars! They were made by Lehman Gross Bahn of Germany.

Clearly Steve was a huge collector and had a vision to create a setup that highlighted his life. He contracted Robert Reid Studios of Fort Worth to build a layout to his specifications in his house!

It was displayed on the second floor of his 10,000 square foot home in North Dallas off the Tollroad and Royal, over 3 Ferrari’s…

Unfortunately Steve passed away 4 years ago and his wife Jane needed to do something with the trains. So Jane donated the 500+ cars and locomotives that go with it to the museum of the American Railroad.

“I feel like I’m doing the right thing,” Jane Sanders said. “He wanted lots of people to see this. That was his real wish.”

The exhibit starts in Colorado. You first see a logging operation with a man on a one man barge trying to maneuver through the cut aspen trees in a water feature. If you look long enough, it looks like he’s really steering his one man barge. 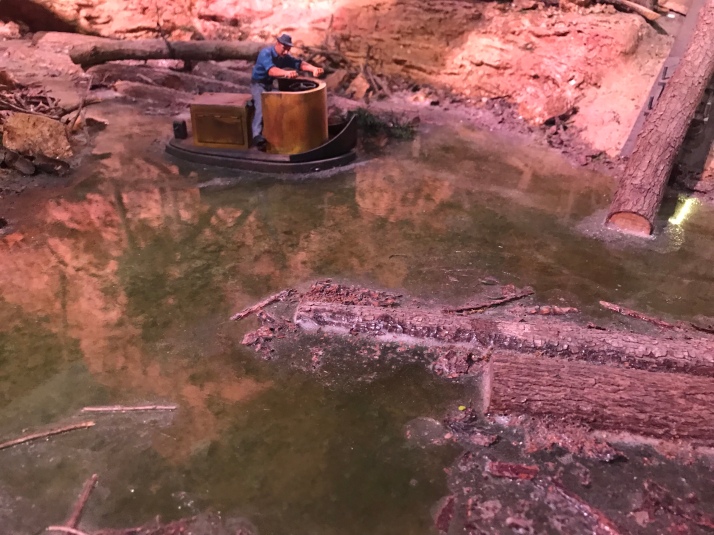 The details are absolutely stunning!

It continues to New Mexico where a working roundhouse allows the trains to be able to change out their engines.

Up to West Texas where his family has an oil business with actual pumps. Then continues to Corsicana which includes a replica of their own backyard gazebo along the lake. 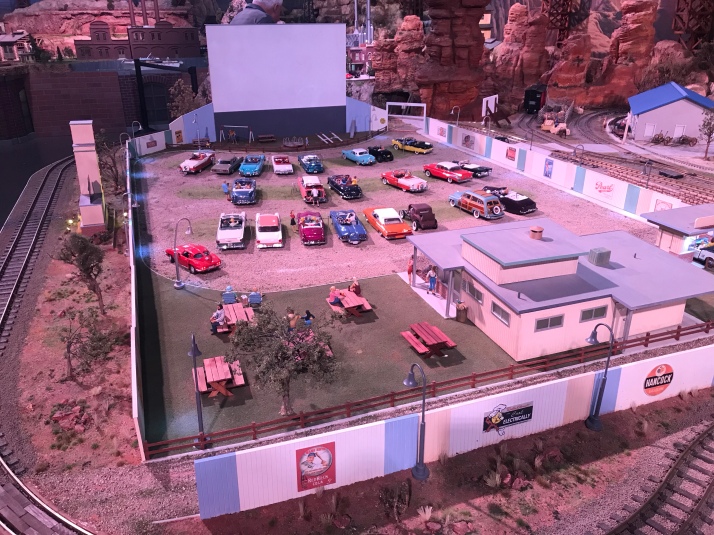 It is so elaborate that the lighting is set to a morning, dusk to dawn then to night time. At night, the lights come on everywhere. In the buildings, the light posts and even the headlights on the cars.

Then it ends in Downtown Dallas. 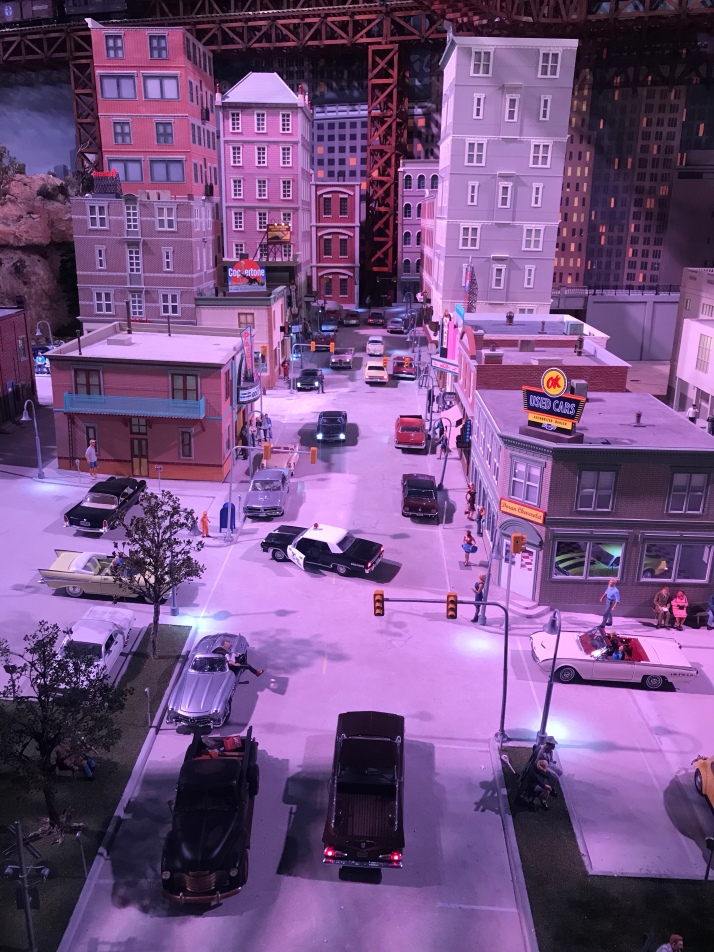 Above is a section of the downtown Dallas circa 1950s- era street scene lined up with Pontiac’s and Chevrolet’s on Elm Street. 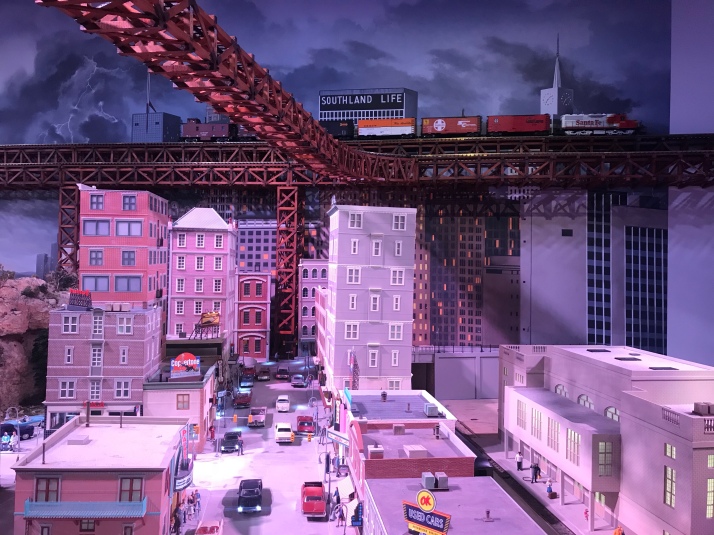 A plan for the exhibit is building a 15 story hotel called Hotel Settles which was built in the 1930’s. in Big Spring Texas.

They also plan to incorporate thunder and lightning.

If you are anywhere near Frisco and want to see a truly unique exhibit, I would strongly recommend taking a stroll through Steve Sanders creation. It will not disappoint!