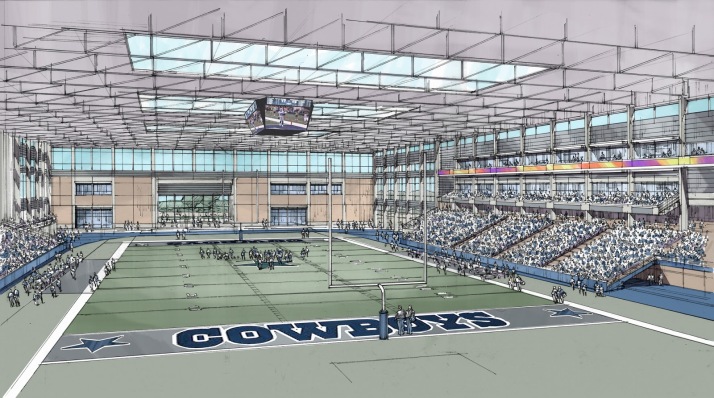 The Dallas Cowboys are moving to Frisco, Texas in the Fall of 2016 and plan to build a Domed Training Facility like the Concept above.

The Dallas Cowboys new Indoor Training Facility in Frisco, Texas plans to seat a minimum of 12,000 fans for games. The practice facility will also be a multi-use facility that can be refigured to accommodate 22,000 seats for other events like concerts.

Current plans are that the Frisco ISD will have use of the facility on Thursday and Friday evenings for football games. As the first school district in the state with an indoor stadium, it will also be an attractive destination for “Blue Star Stadium” to host potential Texas playoff games as well.

The Dallas Cowboys, meanwhile, will once again have an indoor facility for practice in inclement or freezing weather. Surprisingly, the Dallas Cowboys mentioned that the Frisco Independent School District will have first use of the facility when there is a need.

There are currently six schools in the Frisco ISD as of today. A seventh will be added in 2014 called Independence High School and an eight in 2015 in West Frisco called Reddy High School. The district uses two stadiums currently for the Frisco high school games at the moment which are Frisco ISD Memorial Stadium and the FC Dallas Stadium.

But this actually makes sense.

Instead of the school district building a new stadium to accommodate the addition of Independence and Reddy high School, Frisco ISD officials decided it was best to enter a joint venture with the Dallas Cowboys. (Duh!) It will be similar to the district’s arrangement with FC Dallas. The new Dallas Cowboys Training facility will include all the bells and whistles that come with a Texas high school football stadium, including locker rooms and a scoreboard. 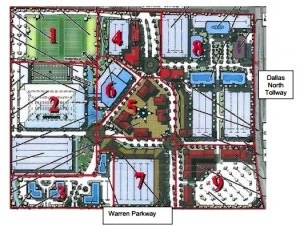 Above is another concept plan that was included in the economic impact report done for the Frisco Economic Development Corporation on the Cowboys project. The plans are not set in stone.

As shown on the plan, the sports complex is parcels 1 & 2, the corporate headquarters will be parcel 6, and the mixed use development is parcels 3-5 and 7-9.